What is the Virtual YouTuber (hereafter VTuber)? Who are they? Is there any uniqueness as a culture? Does it need any academic account or not?  Why are (mainly japanese) people attracted by them?

In this essay, I will make concepts to account for these questions from perspectives of media-communication studies and aesthetics. Section I , introducing VTuber, discussing about it from media communication studies, then, Section II, I try to consider its uniqueness in the imaginative appreciation relationship personae and character, finally, I summarize my account about VTuber’s Three Bodies.*1 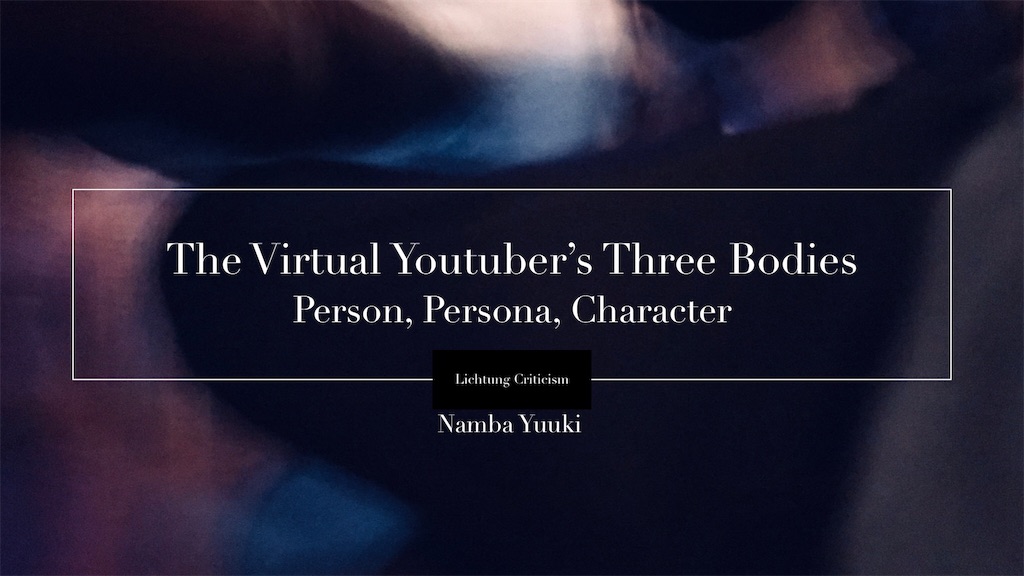 I. Person and Personae

Who is a VTuber? Watching its videos, you may recognize that Vtuber’s movements and its voices are produced by someone invisible for us. Then, reading fan comments for VTuber in Twitter or YouTube, you’ll find that fans ‘talk to’ them, and sympathize/ antipathize them, even more, tell their sincere love for them, like as they do for real their friends/ lovers. So, you may consider VTuber as a real ‘person’, because 2D or 3D models (avatars) of VTuber are moving through tracking some real human, and people are ‘talking with’ and make some relationships with them akin to real one. It’s commonsensical, nevertheless, not true.

Person, however, does not directly communicate with us. Audiences make a specific communication with the mediated figure of the person. Person's appearance mediated by such media (e.g, radio, television, etc.) is called "media persona (e)" (Horton & Wohl 1956) in media / communication studies.

Audiences of VTuber do not have relations with ‘person’, but ‘media persona(e)’: the person’s figure in the media (e.g., radio, TV, YouTube, Twitter). Horton & Wohl emphasized that the relationship between persona and audiences is not interactive in many cases, nevertheless, audiences feel they contact with persona, and think make interactive relathionships like their daily face to face one.  They named this illusionistic relation as ‘parasocial relathion(PSR)’.  This illusion is mainly made by media personae’s various addressing for audiences (e.g., eye contact through camera, addressing audience names etc.). Samely, VTuber can make PSR with its audiences by such methods.

From the perspective of media / communication studies, VTuber was characterized as a person wearing the image constructed. However, it is still not clear how the persona is appreciated. Therefore, in this section, I try to analyze the way of appreciation.

When the audiences see the VTuber, what they see is not the actual person's figure. It is a 3D or 2D anthropomorphic picture movement generated by a person's movement. Let's say what this picture represents is "fictional character".

In addition to this association, the characteristics of VTuber can also be found in the pluralities of the way how audience aprreciate persona. For example, a particular VTuber seems to deviate from his appearance and voice or character that can be imagined in general and to speak outrightly the experience and thought of that real person. On the other hands, there is an another type of VTuber who is not only in videos, but also even in the SNS, plays a role play, and it is appreciated by audiences as a character itself.

The style in how VTuber is appreciated can be roughly divided into two types. Firstly, if the person seems to appear clearly as in VTuber, it can be said that the audience is appreciating VTuber as ‘qua person's persona’. VTuber appreciated in such style, may be regarded as the person him/herself, and it is considered to be speaking person's experiences and ideas to some extent, as a VTuber.

On the other hands, audiences appreciate VTuber as the living character, as a persona of the character, that is, ‘qua character's persona.’ At this type, audiences place importance on role play as a character of VTuber and appreciate her as truly fictional character and avoid to remark real person of the VTuber. Also, audiences would not be regarded to properly appreciate such VTuber unless they refrain from referring to the real person in appreciation.

My claim can be summarised as follows.

The appreciative objects of VTuber are divided into three bodies: person, personae, and character. Then, the personae are always tiered with the picture of the character, while the layers of the person / character and the personae are associated with each other.

Let's call this framework VTuber's "Three Tiered Theory". This theory may make it possible to account the unique ways of audience experiments, and it will be a clue to critique and comparison with various cultural forms(Figure I). 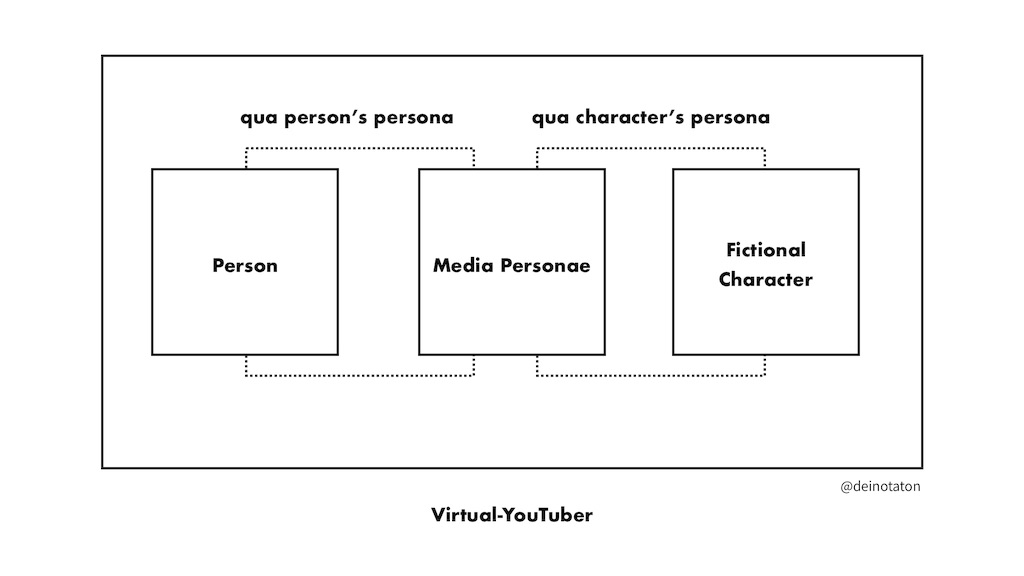 When I first encountered the VTuber, I was very surprised and began to think its uniqueness.  Thinking through VTuber, I have got a lot of interesting ideas about not only about this culture, but also about many other cultures like idol culture, fan culture, and so on. I’ve just started investigating this cultural phenomena, so there’s left a lot question needed to answer, I will continue to study and wish for another researcher join our exploration.